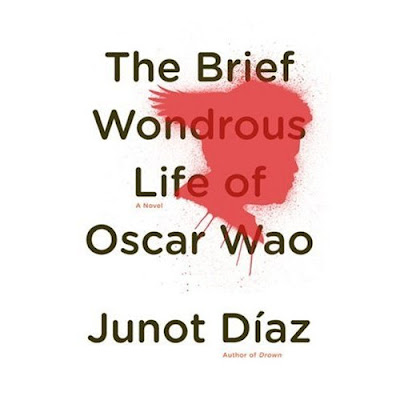 O vencedor deste ano dos prémios Pulitzer na categoria da literatura foi "The Brief Wondrous Life of Oscar Wao" de Junot Dias. Mais uma escrito por um imigrante nas Américas. Ainda não o li, mais está na minha lista de compras desde que ouvi o podcast sobre o livro na National Public Radio. Outras críticas são igualmente extremamente favoráveis. Aqui está a sinopse da editora:
"[One} might at first be surprised by how many chapters of a book entitled The Brief and Wondrous Life of Oscar Wao are devoted not to its sci fi–and–fantasy-gobbling nerd-hero but to his sister, his mother and his grandfather. However, Junot Diaz's dark and exuberant first novel makes a compelling case for the multiperspectival view of a life, wherein an individual cannot be known or understood in isolation from the history of his family and his nation.Oscar being a first-generation Dominican-American, the nation in question is really two nations. And Dominicans in this novel being explicitly of mixed Taíno, African and Spanish descent, the very ideas of nationhood and nationality are thoughtfully, subtly complicated. The various nationalities and generations are subtended by the recurring motif of fukú, the Curse and Doom of the New World, whose midwife and... victim was a historical personage Diaz will only call the Admiral, in deference to the belief that uttering his name brings bad luck (hint: he arrived in the New World in 1492 and his initials are CC). By the prologue's end, it's clear that this story of one poor guy's cursed life will also be the story of how 500 years of historical and familial bad luck shape the destiny of its fat, sad, smart, lovable and short-lived protagonist. The book's pervasive sense of doom is offset by a rich and playful prose that embodies its theme of multiple nations, cultures and languages, often shifting in a single sentence from English to Spanish, from Victorian formality to Negropolitan vernacular, from Homeric epithet to dirty bilingual insult. Even the presumed reader shape-shifts in the estimation of its in-your-face narrator, who addresses us variously as folks, you folks, conspiracy-minded-fools, Negro, Nigger and plataneros. So while Diaz assumes in his reader the same considerable degree of multicultural erudition he himself possesses—offering no gloss on his many un-italicized Spanish words and expressions (thus beautifully dramatizing how linguistic borders, like national ones, are porous), or on his plethora of genre and canonical literary allusions—he does helpfully footnote aspects of Dominican history, especially those concerning the bloody 30-year reign of President Rafael Leónidas Trujillo. The later Oscar chapters lack the linguistic brio of the others, and there are exposition-clogged passages that read like summaries of a longer narrative, but mostly this fierce, funny, tragic book is just what a reader would have hoped for in a novel by Junot Diaz."
Posted by Alvaro Santos Pereira at 08:07